Early morning travel saw us arriving at the city of Szczecin in West Pomerania. The city is the regional capital, the gateway to the Baltic Sea and clearly a very important port for this part of Poland. We were delighted to discover that we were to board a small river cruiser and explore the hidden […]

Early morning travel saw us arriving at the city of Szczecin in West Pomerania. The city is the regional capital, the gateway to the Baltic Sea and clearly a very important port for this part of Poland. We were delighted to discover that we were to board a small river cruiser and explore the hidden gems of the Odra (Oder) river and its network of islands.

The Szczecin and Swinoujscie Port complex, the largest and most developed in Poland, 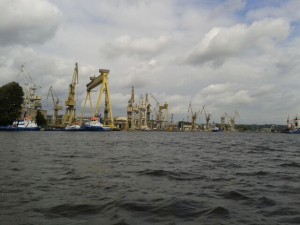 is clearly an important part of the landscape and exerts a considerable influence on the city’s economy. Despite a decline in shipbuilding in recent decades, this industry survives and new ships were being built on the quayside as we passed. Passing through this busy port, we were uncertain how this industrial and shipping activity would affect the fragile habitats and wildlife of the Odra River.

Our first impressions that a wildlife tour in close proximity to such an urban and industrial centre was unlikely to be spectacular was completely wrong. Within ten minutes of setting off we were greeted with unbelievable views of white-tailed eagles, right on the edge of the city’s river complex. Dense vegetated islands make an ideal breeding location for these top predators and the river and its lagoons provide abundant food for several breeding pairs. 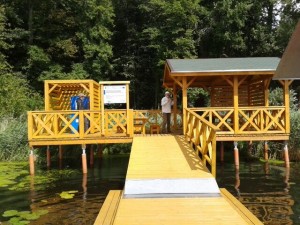 We docked beside a small timber built sheltered pontoon, several of which have recently been built throughout the small islands. These are an ideal stop over point with a picnic table, toilet and information board, which gets people close to the island without actually setting foot and disturbing the wildlife or causing damage.

From here we continued across the lagoon, all the time scanning for wildlife and taking in as much as we could of the experience. Highlights included more fantastic views of white-tailed eagles, large rafts of coot and fishing black terns and numerous perching herons.

Once back in Szczecin we rejoined the staff of the Landscape Parks at their office for presentations on the parks in their care and useful discussions following up aspects of management we had discussed in the field. We were given a very warm welcome by the Landscape Park team and hospitality was generously provided by the Marshal’s Office.

The afternoon gave us a chance to explore the city, which was largely destroyed in WW2. This including getting a view from the top of the cathedral spire. From here the juxtaposition of the city, the port and the river with its islands was even more striking and a good reminder of both the clear disconnect between these aspects of the landscape and just how special the morning boat trip had been.

This site is unlike any we have in Scotland in terms of the wealth of wildlife in close proximity to a major settlement. However, both SWT and RSPB Scotland have considerable experience of showing people wildlife in a range of settings, including with both rural and urban audiences.

We were struck by how little wildlife tourism infrastructure exists despite the ease of reaching this site. In Scotland creating similar eco-tourism opportunities from smaller coastal hubs and gateways to certain island communities presents challenges because of varying geology and open water conditions. In general wildlife tour boats have to circle with occasional landings on old 12 stone piers if available. By contrast the Odra allows for relatively easy, controlled access with guaranteed sightings.

Given the industrial and trading importance of the river we were struck by some parallels with the Forth and the Clyde estuaries in Central Scotland where communities also face the challenges of a decline in traditional industry and the fact that the vast majority of the population living in these areas is disconnected with the river. In all three cases it seems that there is a lack of knowledge of the international importance of the wildlife in these estuaries. However, unlike in the Forth or the Clyde where the wildlife spectacle can be difficult to access, Szczecin allows for easy access and therefore presents a fantastic opportunity to develop a new green economy based on this wildlife.

Minimising island disturbance with the landing platforms is an excellent addition to the area but further information on the wildlife and its importance could be provided on the pontoons. The creation of an obvious starting point for visitors on the waterfront with wildlife information would be beneficial. In the future this could provide a focal point for talks, events and guided wildlife watching trips.

Given the importance of the area, a growth in wildlife tourism would have to be managed sensitively. Measures to assist with this could include developing codes of conduct or accreditation for boat operators and guides and providing information to recreational users on potential impacts of disturbance. The ecology of the lagoons will be affected by the surrounding land use and any additional inputs of pollutants and sources of eutrophication from tourism development would need to be controlled carefully.