Our sixth day kicked off at the field office of the Society for the Coast, where we met with Dr. Małgorzata Torbé, project coordinator of the Odra Delta Nature Park. We were given an introduction to the park and its land management issues before heading out for a walk on site. The Society for the […]

Our sixth day kicked off at the field office of the Society for the Coast, where we met with Dr. Małgorzata Torbé, project coordinator of the Odra Delta Nature Park. We were given an introduction to the park and its land management issues before heading out for a walk on site.

The Society for the Coast was established in 1996 and delivers nature conservation of wetlands, environmental and nature education and community engagement. The charity owns the 1000 ha Nature Park, which is within the Natura 2000 network and contains actively managed meadows and pasture along the shore of the Szczecin Lagoon.

Once again, this area has been heavily influenced by political and land use change. The meadow and pasture habitat was maintained by traditional farming methods such as grazing and mowing. However, the movement of German communities from the area after 1945 and the collapse of the state-owned-farms in the post-communist era led to land abandonment. Without active management, reeds dominated, the habitat degraded and biodiversity value dropped. The Society for the Coast has since reintroduced grazing using Polish Konik ponies and highland cattle and areas unsuitable for grazing are mown.

We heard about rece 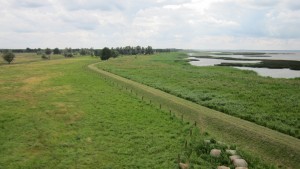 nt significant investment in artificial flood defences along the coastal boundary of the reserve. Well managed wetlands can provide effective natural defence against flooding so it is disappointing that the decision was made to expand and update an existing artificial flood defence, particularly within a Natura site. There could have been a real opportunity here to use the park as a demonstration site for natural flood defences, particularly as it is currently uninhabited and is owned by an NGO. However, Kazimierz explained that lack of advocacy capacity within the NGO 14 community is a real limiting factor and it is difficult to influence such decisions.

As we walked around the park, it was evident that the local community value and make use of it. A local sports camp cycled through on bikes donated to the Society for the Coast by a Dutch partner organisation and Kazimierz pointed out artwork created by local children. A small garden at the entrance to the park provides information on plants that people may have in their own gardens, as an introduction to nature. 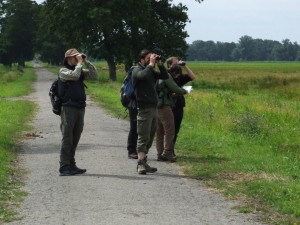 ng and visited a viewing tower that gave excellent views of the Park and lagoons. Małgorzata and Kazimierz were pleased when we spotted a large flock of black terns on the lagoon, including juveniles, as a project to install rafts three years ago had been thought to be unsuccessful and lack of monitoring resource this year meant the area had not been checked recently. Finally we had a fantastic sighting of a family of wild boar running through the meadows, before a torrential downpour had us running for cover.

Before we left, Kazimierz showed us around the site of the new Society for the Coast offices, currently under construction. As he described how the offices will be used, it was evident that they will not only be a significantly improved base for the NGO but will also be a valuable asset to the local community.

Although the political and social drivers in Scotland are different, land abandonment is also a very real threat to habitats which rely on active management, such as machair and lowland wet grassland. SWT and RSPB both purchase land and restore traditional management methods to secure habitat for wildlife. In recent years both NGOs have also started taking a landscape scale approach to land management, using our own sites to demonstrate sustainable land management practices and encouraging private landowners to manage their own land in the same way. There is potential to use the Odra Delta Nature Park in the same way, promoting the benefits of functional wetlands, wildlife spectacle and high quality grazing. In this way, the environmental value of the wider countryside could also be improved. Interesting opportunities exist to link this type of ‘high nature value farming’ with marketing of local produce and the potential to sell quality meat that has contributed to nature conservation is one that could offer opportunities for NGOs and local farmers to benefit financially from nature conservation.

We did not have time to probe the details of water management in Poland or how well the Water Framework Directive has been transposed there. However, lack of advocacy capacity is evidently limiting the NGO community’s ability to influence high level policy. Each EU State is required to characterise and identify ecological status of all water bodies. River basin plans must been drawn up every six years which identify the actions required to achieve at least good ecological status in all water bodies. The presence of artificial flood defences could mean that the lagoon can not achieve good ecological status. However, if the original artificial defence had been removed and natural flood defence used instead, good ecological condition could have been secured. River basin plans must be made available for public consultation and this is the key opportunity for NGOs to influence what happens on specific water bodies. Whilst policy advocacy work requires specialist knowledge, influencing high level policy decisions can be an effective way of influencing what happens on the ground at a national scale.

Community links are obviously very important in this area and the new centre will provide the facilities required to improve community engagement and environmental education. The park could also benefit from further interpretation at key points around the site, highlighting its nature and cultural value. For example, an information board explaining the black tern project, which has been a success, some information about the village which once stood on the site, background on the Konik ponies and perhaps another board at the viewing platform would all add to the visitor experience.

Project: Village Voices Sustainability & Identity in Rural Cyprus. The theme of our project was Sustainable development through c | read more

Woodworking & forest management: tradition and innovation in Galicia. Update 7th May 2020: Course postponed: we are in dis | read more

Connecting people with cultural and natural heritage in Bulgaria, and lessons for Scotland

Connecting people with cultural and natural heritage in Bulgaria, and lessons for Scotland By Katherine Murphy, Trees for Life Cult | read more