On our final day we visited the coast, staying in accommodation in Kamien Pomorski on the Zalew Kamienski, a large lagoon connected to the even larger Szczecin Lagoon. The lagoons are separated from the sea by only a narrow stretch of land and are saline due to connectivity with the sea via short channels. This […]

On our final day we visited the coast, staying in accommodation in Kamien Pomorski on the Zalew Kamienski, a large lagoon connected to the even larger Szczecin Lagoon. The lagoons are separated from the sea by only a narrow stretch of land and are saline due to connectivity with the sea via short channels. This contributes to a very interesting landform and ecology.

The area has become a very popular area for tourism, with many Germans and Poles traveling to visit the attractive beaches and coastline. This popularity has contributed to the growth of a number of large settlements and contributes to relatively intense visitor pressure, particularly in areas near the coast.

We visited the seaside resort of Miedzyzdroje, a settlement with a permanent population of only around 5000 people but with a much larger influx of visitors during holiday periods. The Wolinski National Park covers the area immediately East of Miedzyzdroje and managing the intense visitor pressure on the area is a key challenge for the national park authority. 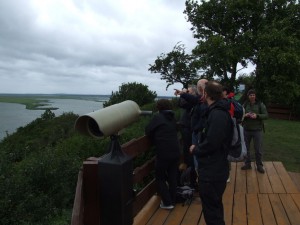 After the visitor centre we stopped at a cafe and viewpoint overlooking large reedbed islands in the estuary. Such a large area of natural reedbed wetlands is unlike anything we have at home and the cafe and viewpoint was a fantastic place to view the expanse of this habitat, a small part of which is managed by the Society for the Coast.

We also visited a spectacular viewpoint on a steep coastal hillside close to Miedzyzdoje. The site had been used as a cold war look out station but post-communism had been opened up for public access and had since become a very popular visitor destination. Although scarcely a couple of hundred meters high, in the generally flat landscape, the viewpoint offered very attractive views. It was part of a geological cliff along the coast, which formed the high point of the narrow strip of land separating the Baltic sea from the lagoons behind. The cliff was formed from sedimentary material and dunes stabilised by forestry and other vegetation. As in many areas of West Pomerania, the area was heavily wooded with mixed broadleaf woodland. The amount of woodland was a stark contrast to the relatively treeless landscapes, even in the lowlands, that we are used to in Scotland.

(a) to conserve and enhance the natural and cultural heritage of the area,

(b) to promote sustainable use of the natural resources of the area,

(c) to promote understanding and enjoyment (including enjoyment in the form of recreation) of the special qualities of the area by the public, and

(d) to promote sustainable economic and social development of the area’s communities.

This means that Scottish national park authorities and other public bodies are required to actively promote development in the national parks as well as conserving and enhancing natural and cultural heritage. As a result, there have been a number of high profile development proposals in Scotland’s national parks. This seems to contrast with Polish national parks, where, although 18 development could happen, as we saw through the development of a new lifeline road through Wolinski National Park, this was very much the exception.

This was a particularly interesting day, with the issue of reconciling recreational and visitor pressure a clear common difficulty between Poland and Scotland. Of particular interest was the fact that Wolinski National Park, a national park with much stricter protection than the national parks in Scotland, was able to resist the vast majority of development pressure and yet was still able to make a significant contribution to local economic development by providing a popular visitor attraction and resource. In Scotland, proposals for new national parks or other protected areas are inevitably met with strong resistance from those with primarily economic interests, who suggest that their presence will be economically damaging. In this instance at least, this clearly has not been the case. While there are still challenges, the example of Wolinski National Park seems to show that a relatively strict protection of natural resources can coexist with very successful and busy local communities – an important lesson for Scotland as we look to progress long awaited additional national parks and other protected areas.

Conversely, there seemed to be less investment in interpretation and access related to wildlife than we are used to. It seemed that real opportunities exist to promote the wildlife value of this area and add to the visitor experience. While this would need to be done with care, it appears to offer significant potential to develop eco-tourism businesses that would benefit local communities and provide an incentive to conserve and enhance the wildlife of the area.