In terms of organisational structure there are strong similarities to Scotland. The Ministry of Agriculture (MOA) develops policy. The State Forest Service sits within the MOA and enforces legislation across the industry whilst providing support and issuing licences/permits for all forests regardless of ownership. Finally, the Latvia State Forests Joint Stock Company operates as a commercial entity and manages all state owned forests.

However as Normunds went into more detail and as we visited more forests throughout the week it became clear that organisational structure was where any similarities to forestry in Scotland ended. In terms of forest cover, ownership and management Scotland and Latvia could hardly be more different.
It was fascinating to spend time in a country with such a different approach, where forestry seems to be winning out over intensive tree farming. Since being back at work I’ve been looking at my sites differently, wondering how much of what I saw could work here and daydreaming of Wolf , Moose, Lynx and Bear…. Paldies Latvia! 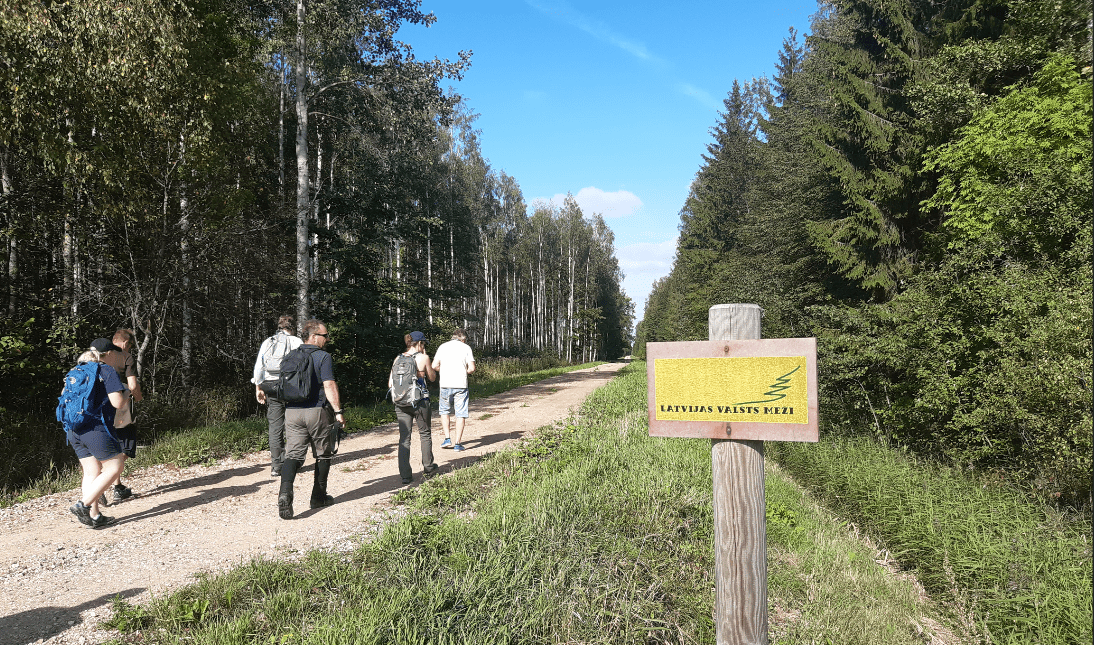 On our 2nd day we were given a presentation by Normunds Struve of the Latvian State Forest Service. This provided an outline of how Forestry in Latvia is structured with breakdowns by ownership, species composition, age structure, management types and exports/production.

In terms of organisational structure there are strong similarities to Scotland. The Ministry of Agriculture (MOA) develops policy. The State Forest Service sits within the MOA and enforces legislation across the industry whilst providing support and issuing licences/permits for all forests regardless of ownership. Finally, the Latvia State Forests Joint Stock Company operates as a commercial entity and manages all state owned forests.

However as Normunds went into more detail and as we visited more forests throughout the week it became clear that organisational structure was where any similarities to forestry in Scotland ended. In terms of forest cover, ownership and management Scotland and Latvia could hardly be more different.

Latvia is the fourth most forested country in Europe. Cover has steadily increased from 27% in 1925 and now stands at 53% and rising (compared to 19% in Scotland). Most of this increase occurred post WW2 under the Soviet Union. Initially agriculture wasn’t a priority in Soviet Latvia and areas of poorer quality land were colonised by forest. This trend is continuing (albeit more gradually) across Latvia today as the rural population declines. There is currently around 300,000ha of abandoned agricultural land in Latvia, the poorer parts of which have good potential for further forest expansion. 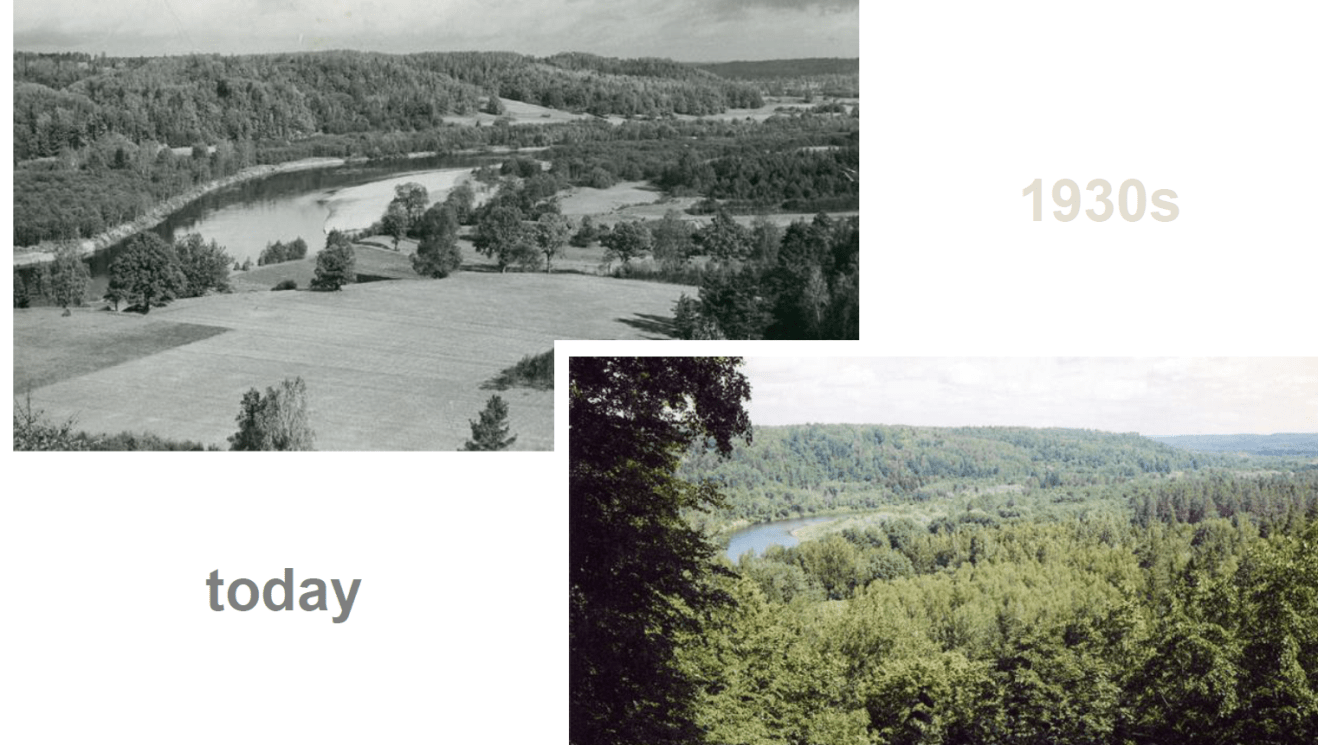 Currently 49% of the forest area is state owned, with 50% privately owned and 1% in the hands of local municipalities. In Scotland 33% is state owned, with 67% privately owned. Privately owned forests in Latvia are spread between approximately 135,000 private forest owners. Despite the fact that some of those owners will be companies and investors it is still a very high figure for a country with a population of under 2,000,000. Of the 135,000 private forest owners 78% own just 10ha or less. This is in marked contrast to Scotland where large areas owned by traditional estates and investors dominate the private sector. The following figures outline the huge gap in both the concentration of forest ownership and the sizes of forest holdings between Latvia and Scotland.

Interestingly, Normunds presentation highlighted that the pattern of ownership in Latvia is changing, with larger holdings steadily increasing their share of the private forest area.

State owned forests in Latvia are mainly managed on a clearfell and restock system, which was all sounding quite familiar until Normunds informed us that the maximum clearfell in Latvia is just 5ha (with an average of approximately 1.5ha).  Coming from my world of up to 200ha restocks, this was quite a shock.  State forests are mainly restocked by planting.  Scots Pine, Norway Spruce and Birch are the dominant species (see below).

In the private sector continuous cover forestry (CCF), selective felling and natural regeneration are common on smaller holdings as owners look to avoid restocking costs and limit workload while generating a steady, long-term income.  The combination of sensitive management on sites where trees have naturally recolonised has resulted in high growth and regeneration rates .  This allows many owners to steadily fell less volume than they are gaining through annual increments and continually increase the value of their stands.  Deciduous species such as Birch, Aspen and Alder form the majority of cover in private forestry, along with reduced components of Norway Spruce & Scots Pine (see above).  Private forests are favouring Norway Spruce (18%) over Scots Pine (7%) for restocking, as it better meets the shade-tolerant requirements of CCF.

Overall 54% of Latvia’s forest area is deciduous and 46% conifer. Another interesting difference with Scotland is that 68% of restocking occurs through natural regeneration and only 32% by planting.

Normunds explained that the Ministry Of Agriculture are aiming to double the export value of timber and forestry products within the next 20 years. It will be interesting to see how they work towards this. Will there be a gradual increase in pressure to move towards more intensive management? Or will the current forest age structure combined with a focus on value added products at the manufacturing stage mean that it will happen fairly naturally?

It was fascinating to spend time in a country with such a different approach, where forestry seems to be winning out over intensive tree farming. Since being back at work I’ve been looking at my sites differently, wondering how much of what I saw could work here and daydreaming of Wolf , Moose, Lynx and Bear…. Paldies Latvia!